So yesterday I posted this Esquire article “PHILIP SEYMOUR HOFFMAN’S FINAL SECRET” on my personal Facebook page. Several of my friends picked it up and shared as well, including a friend who tagged me in her post.  Meaning I got notified about comments being made.

The first comment she got on the article was, in my opinion, extraordinarily negative, cynical & borderline hateful. I am not going to copy it verbatim, because it is not mine to share. Frankly the tone was so nasty it made me a bit sick. Basically, it stated that we should stop caring about the death of famous people who would not reciprocate if the situation were reversed & that Philip Seymour Hoffman deserved to die because he was, in the end, a selfish junkie. And furthermore, the police only cared about the case because it was high profile. All of these things put together should make us all feel insignificant by comparison. 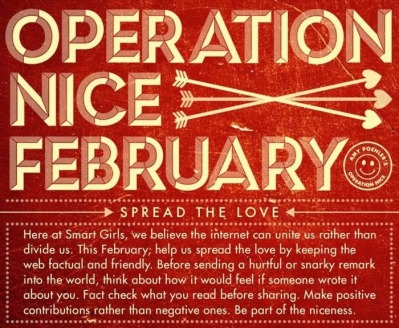 As coincidence would have it, I’d been seeing negative and nasty blasted all over Facebook last night. And then I came across the Operation Nice mission from Amy Poehler’s Smart Girls. The gist being that we need to raise the level of discourse out here in Cyberland. We need to try to promote a positive atmosphere, not a nasty snarky one.

Perhaps I should have held my tongue and gone to bed. Instead I crafted what I thought was a non-snarky comment to the PSH posting that still expressed why I was upset. It was this

For what it’s worth, I think when we quit caring about the deaths of others – no matter what the cause – we lose a bit if our humanity. If I am moved by the death of this man it is because his story, his work, his life in some way touched me.

I shared this article because it also moved me. Our mutual friend shared it for her own reasons. That connection is meaningful, if small and not significant for anyone but me.

Apparently somewhere in the wee hours the original poster made comments that were specifically & hatefully aimed at me. He removed them himself before I read them. However he did leave a new comment in which he called me out for “degrading” him for having the opposing opinion. Then reiterated his own thoughts that the death & investigation were being treated differently because PSH was rich & famous. That “we” were treating the death of a junkie as though he were a victim & that it was wrong.

I don’t mind telling you, I was more than a little put off. What follows is my reply to him.

I couldn’t agree more – we are all entitled to our opinions and to express them. I have seen lots of comments regarding this particular death, this particular man and the following investigation & have been saddened to see such negativity regarding the loss of a life.

When I said “I think we” I was offering my opinion regarding society as a whole, and not intending to attack anyone in particular. That said, if I offended anyone, it was certainly not my intention. I am a firm proponent of civil discourse, both in person & in social media.

Not that my two cents matters, but just for the record… I agree that it may be sensational of the NYPD to go into a larger scale investigation into the drug dealers in this case. I honestly cannot speak to what level of investigation a similar quantity of drug evidence in a non-celebrity’s death would cause. Frankly, I don’t care. It is in my nature to try and see the positive spin on things, the bright side of any dark situation. If the death of PSH shines a light on the issues of drug addiction, the relative ease of getting those drugs, the dangers of using them and mental illness as a whole, then perhaps his death serves some greater good.

Much like any one’s story that is highlighted by the news & social media, I see each as being representative of a larger picture. Some would call me overly optimistic or naive. I’m ok with that. Just don’t tell me my perspective is wrong, it’s simply my own.

I honestly try to follow the Golden Rule. Treat others with respect & kindness and expect to be treated the same. Naturally I’m an enormous fan of this Operation Nice idea. I believe we cannot move forward as a society until we all learn to be far more tolerant and respectful of others & how we express our views. Just because the Internet isn’t face to face doesn’t mean we can hide behind our keyboards and forget we are all human beings.

Why am I sharing all this?

Well, I guess I want you to understand I’m just some random lady speaking my heart, sharing the things I find interesting, important, funny or stupid. I don’t have any delusions that EVERYONE is going to agree with my take on any of it.

But just like I remind my kids anytime we go to the playground – play nice.

3 thoughts on “Like it or Lump It: Let’s Play Nice”