Sheesh! Lots of talk on the interwebs today about consciously uncoupling. Who’s doing it & what the hell does that even mean?

Eh, no one here in Toddlerville has a clue about that stuff. ‘Round these parts we are all about the coupling that was solidified 3 years ago today. That would be Hubs & lil ol’ me – Serendipity.

I won’t bore anyone will all the delightful wedding details. (5 hour open bar!) I will admit, however, to being outshone at my own wedding by the cutest attendant EVER – the darling Boy, then 10 months old. 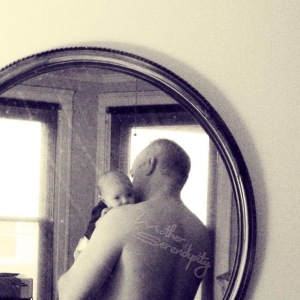 Now, some folks would say we did things a bit backwards. Some would probably say we eventually did the “right thing.”  I can say with certainty lots of people didn’t understand why we were doing it at all. Frankly I would imagine that whatever most folks thought, they reckoned we got married to “legalize” our family.

Of course, there’s truth in that. But as beautiful and amazing as my Boy is (or any kid, for that matter), he’s no reason to take the plunge into wedded bliss.

In case you’re not a regular (of the blog or the bar), Hubs and I met in our local Irish pub in Queens. At the time I was one half of another couple. So we were friendly, but not friends. I can recall three honest-to-goodness conversations over the first year or so I knew him.
1st: about the tandoori chicken he was making on BBQ Sunday.
2nd: about trivia night & my possibly joining his team (never happened).
3rd: a heated discussion about baseball. He is a naturalized Mets fan & I’m a life-long Yanks fan. Yeah… As I recall we rarely chatted for a long time after that one.

Eventually I uncoupled, moved a bit further away & didn’t frequent the pub as often. Then yada yada yada… I got a new iPhone and we started spending time together.

Yep, I just yada yada yada’d right over that.

Yes, the iPhone is important. As it happened, he was one of perhaps 4 people I knew with an iPhone. Two of the others were other friends at the pub. They all hung out in their spot at the bar, playing on their phones and talking about apps. Now I would maybe be put off, but 5 years ago it was kinda endearing. Particularly because they were all Irish & weren’t gadgety type guys.

So when I got an iPhone I realized I had a reason to chat him up. And the rest, as they say, is history. Without speaking for Hubs, I knew pretty quickly I never again wanted to wake up without him.

Not long before I moved back to NYC some college friends got married & for their wedding gift I framed a greeting card of this Apache Wedding Prayer. I could never find a more apt or succinct definition of what would make a happy marriage.

For her part, my mother always told me to marry someone who I enjoyed even when we were mad at each other. She would tell me the truest test of a relationship is if you can argue & make up & truly move on.

Which reminds me of a fight we had early on. Hubs was literally grabbing up a bunch of movies he had scattered at my place – basically taking his toys and going home. I remember telling him that he was being silly. We were arguing, not ending. He could leave, but we weren’t done by a long shot. I have no idea if that moment stayed with him – but that was it – I knew. Ya know?

The fact is marriage should be a conscious coupling. We had options & marriage wasn’t the only, or easiest, one. As the vows often say, it’s not something to be entered into lightly. Hubs & I married because we wanted to stand up, in front of all the friends & loved ones we could gather, and declare that we were on this path Together.
Marriage is a union, a joining of lives and families. So while it was strange to lots of my friends, it made sense to me to take his family name.
Did it all make some things easier, legally? You bet.
But what mattered is just this: I am able to say we are married, he is my husband. These words carry a whole different weight in our society than to say he is my partner. Or my lover. Or the father of my children. Or my best friend.
He is all of those things. And So. Much. More. And THAT is why we got married.
I don’t know, maybe it’s me, but I think that’s kinda why anyone wants to get married. Am I wrong?

*Any reading of this post as either a social or political statement about marriage equality would be solely based on the reader’s bias & not the author’s attempt to draw such parallels.

**Not to deny I’m 100% in favor of marriage equality & sincerely don’t get why anyone would be against it. But this post is just a little riff on my own choices on the occasion of my 3rd Wedding Anniversary.

3 thoughts on “Reflections on Conscious Coupling”