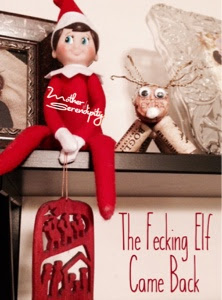 So, yeah… Rebelshire has a fecking elf.

He arrived 3 years ago in a fit of desperation on my part. Trapped at home As a stay at home mom of not one, but TWO rambunctious toddlers in a small NYC apartment, I was game to try anything that might get them to calm down as the holidays approached. The idea of a house elf who would do cute things and inspire them to not behave like lunatics make better choices was undeniably appealing.

Of course, in my fuzzy little daydreams I neglected to factor in my Boy’s monkey-like speed and agility, which are only matched by his natural desire to “examine” ALL THE THINGS. If you can imagine Wreck-It Ralph as a young child, you kind of get a picture of my kid. He breaks shite just looking at it.

Which is why our elf Donny didn’t do much that first year except try to find the highest shelf in the apartment and play peek-a-boo. Even then he was captured more than once. If Donny was real, he’d never have made it home alive for Christmas.

Don’t misunderstand, the kids enjoyed looking to see how many inches he’d moved, and talking to him from afar, but he’s not particularly sought after or adored. Santa Claus he’s not.

My Hubs, who didn’t want the fecking thing to start with, got the most into it, honestly. He merrily embraced his inner tattle-tale, shouting “I’m going to tell Donny!” when particularly frustrated with our Rebels’ behavior. At which point I want to gag him with the damn doll.

I’m sorry to be such a hater; I really am just jealous. Donny the Elf is kinda lame. I tried to make him do semi-entertaining things (that can be seen from below and far away). Yes, like a circus performer Donny does his act VERY high up, in places that are practically unreachable by those under 6 feet tall! Since I’m only 5’2″, we have to rely on the magic of Christmas, and take care of the little. 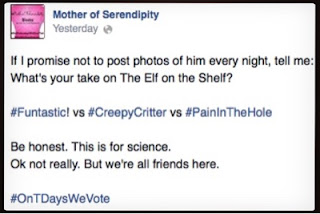 So it’s understandable, I think, that as the turkey pictures were being replaced by all the obligatory elf arrivals a few years back,  I decided to do some informal polling on my Facebook page. I was hoping I could renew my enthusiasm for this “holiday tradition” we’ve saddled ourselves with.

Know what I learned? I’m not alone in my untethered annoyance. Overwhelmingly, people find the whole thing to be a pain in the tuckus, and a particularly creepy one at that. Because, if you’ve got doll phobias, or maybe even clown phobias, this little night stalker from the North Pole is a guaranteed trigger.

Granted, a few of my peeps find all the impish improv to be delightful. These are, no doubt, the same folks having the elf to do all the naughty and/or super fun creative Pinteresty things. I’m sure their elves have photo albums and Pinterest boards all their own.

Seriously,  I’m sure this is my jealousy talking, but is it wrong I dream of an adorable way to shove the elf right in their creative A’s?!

**A version of this post originally appeared on The Inklings of Life in December 2014.**

One thought on “How can you tell it’s December? The Elf is on the Shelf”